A Better Way to Learn.

The Montessori method of education, developed by Dr. Maria Montessori, is a child-centered educational approach based on scientific observations of children from birth to adulthood. Dr. Montessori’s Method has been time tested, with over 100 years of success in diverse cultures throughout the world.

It is a view of the child as one who is naturally eager for knowledge and capable of initiating learning in a supportive, thoughtfully prepared learning environment. It is an approach that values the human spirit and the development of the whole child—physical, social, emotional, cognitive.

Maria Montessori was an Italian physician, educator, and innovator, acclaimed for her educational method that builds on the way children learn naturally. She opened the first Montessori school—the Casa dei Bambini, or Children’s House—in Rome on January 6, 1907. Subsequently, she traveled the world and wrote extensively about her approach to education, attracting many devotees. There are now thousands of Montessori schools in countries worldwide. The Montessori Planes of Development

1First Plane of Development (Age 0-6)
Children possess an absorbent mind, taking in everything from their environment through listening, observing and imitating. Children have the ability to teach themselves. The classroom is designed to provide a beautiful, safe environment that is rich with language and appeals to the senses of the child. The teacher observes the physical, emotional and intellectual needs of your child and matches lessons and experiences accordingly.
2Second Plane of Development (Age 6-12)
Children at this stage are abstract rational thinkers. The classroom creates a community that enables collaborative work characteristic of the elementary child. Children are curious and active participants in their own learning. They often choose what their work is, where to do it, when to do it and with whom to do it. These choices develop independence and build confidence. Socialization is a key element of this plane and the classroom community provides a mini-society where children actively seek to find and create their place in the group.
3Third Plane of Development (Age 12-18)
Children at this stage are in the transition from childhood to young adulthood. Significant physical growth, self-scrutiny, impatient expectations, lack of self-confidence (often disguised as bravado), desire to belong, desire to contribute to society, questioning of rules and the belief that their experience cannot be understood by others characterize this period. As an adolescent’s body is undergoing an amazing transformation, the adolescent’s mind and personality are changing radically as well. Their cognitive abilities improve in three major areas: thinking abstractly, thinking hypothetically and thinking about their own thought processes (meta-cognition). The primary task of an adolescent is to form a coherent sense of self. While humans undergo significant identity changes throughout childhood, it is not until adolescence that we have the capacity to recognize these changes in ourselves. Forming an identity facilitates our ability to take on adult roles in society; if we know ourselves, we are better able to make choices about careers, religion, politics, and personal relationships. 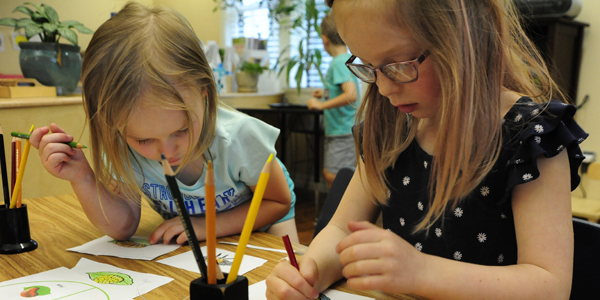 A Montessori class is composed of students whose ages typically span 3 years. Ideally, members stay with the class, and teacher, for the entire cycle, forging a stable community and meaningful bonds.

It is common to see students of different ages working together. Older students enjoy mentoring their younger classmates—sometimes the best teacher is someone who has recently mastered the task at hand. Younger students look up to their older peers, and get a preview of the alluring work to come. 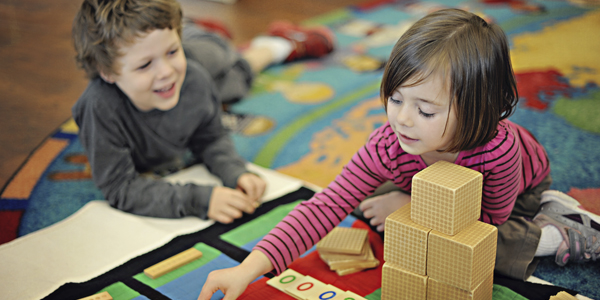 A hallmark of Montessori education is its hands-on approach to learning. Students work with specially designed materials, manipulating and investigating until they master the lesson inside. Beautifully crafted and begging to be touched, Montessori’s distinctive learning materials are displayed on open, easily accessible shelves. They are arranged (left to right, as we read in Western languages) in order of their sequence in the curriculum, from the simplest to the most complex.

Each material teaches a single skill or concept at a time—for example, the various “dressing frames” help early childhood students learn to button, zip, and tie; 3-dimensional grammar symbols help elementary students analyze sentence structure and style. And, built into many of the materials is a mechanism (“control of error”) for providing the student with some way of assessing her progress and correcting her mistakes, independent of the teacher.

The concrete materials provide passages to abstraction, and introduce concepts that become increasingly complex. As students progress, the teacher replaces some materials with others, ensuring the level of challenge continues to meet their needs. 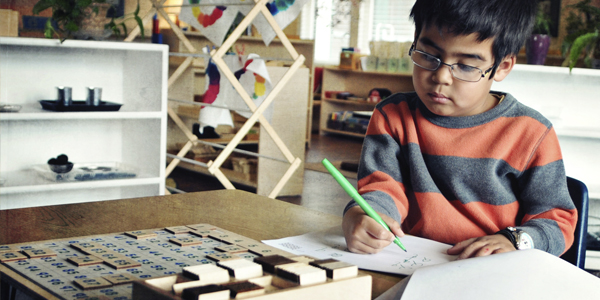 Children as young as three-years-old, after several months in a Montessori classroom, are able to choose their own work and focus on and finish their tasks. Through observation and experimentation, Maria Montessori discovered the importance of a two-and-a-half to three-hour uninterrupted work period. The last hour of a lengthy work period is usually when children are most likely to choose challenging work and concentrate deeply.

Montessori once observed a three-year-old repeat the knobbed cylinders activity 44 times. The girl’s concentration did not waver when Montessori tested it, first picking up the girl in her chair and placing her (still in her chair) on top of her desk and then asking classmates to sing. When she stopped working of her own accord, “…she looked round with a satisfied air, almost as if waking from a refreshing nap.” Montessori called this a “never-to-be-forgotten” discovery. (Spontaneous Activity in Education) 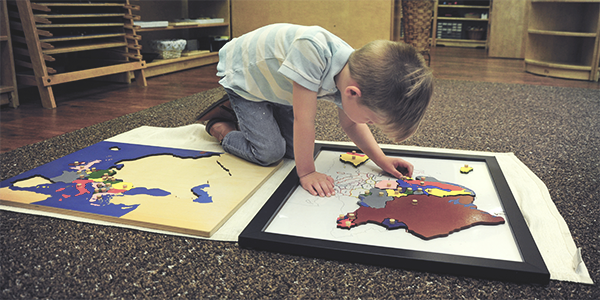 Freedom of choice with limits.

Maria Montessori understood that all children, indeed all people, have different strengths and interests. The Montessori Method offers children the “freedom of choice” in order to maximize the learning process through these individual differences. Some people misunderstand “freedom of choice” to mean that children just do whatever they please and/or there is no such thing as discipline in a Montessori classroom. This is actually far from accurate. 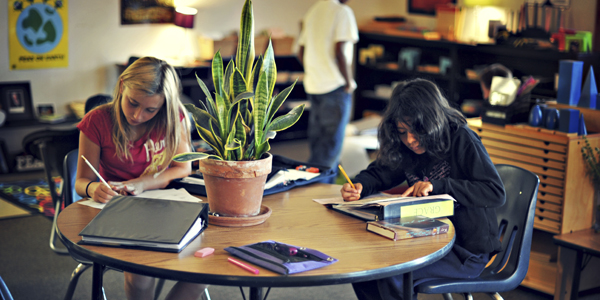 The design and flow of the Montessori classroom create a learning environment that accommodates choice. There are spaces suited to group activity, and areas where a student can settle in alone. Parts of the room are open and spacious, allowing a preschooler to lay out strands of beads for counting, or an elementary student to ponder a 10-foot-long Timeline of Life.

You won’t find the customary rows of school desks; children work at tables or on the floor, rolling out mats on which to work and define their work space. Nor are you likely to find walls papered with brightly colored images of cartoons and syndicated characters. Rather, you might see posters from a local museum, or framed photographs or paintings created by the students themselves.

There are well-defined spaces for each part of the curriculum, such as Language Arts, Math, and Culture. Each of these areas features shelves or display tables with a variety of inviting materials from which students can choose. 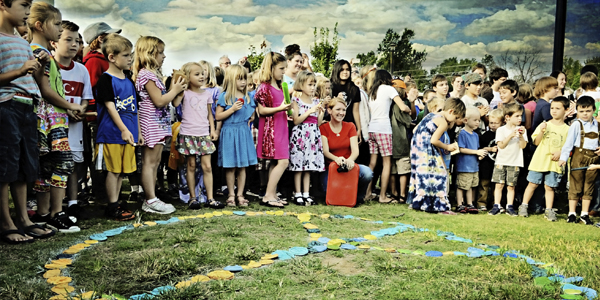 The Montessori classroom radiates harmony and respect. Members address each other respectfully and in modulated tones. There are no raised voices; no rude or hurtful behavior. There is a busy hum of activity, yet also a profound respect for silence. Students show grace and courtesy, and an interest in the welfare of others. “Let me help!” is a common classroom refrain.

Students work together as stewards of their environment. They take turns caring for classroom pets and plants; do their part to maintain order, such as by returning materials to the shelves after use; and help keep outdoor spaces groomed and litter-free.

How to live within a community, to learn independently, to think constructively and creatively: These are the lessons of the Montessori classroom that remain with its students as they make their way in the world.